Spiders in a Jar is the eighteenth episode and the season finale of Season Three and 62nd episode of Reign.

SEASON FINALE — Mary (Adelaide Kane) makes a bold move to defend her reign in Scotland, which results in a battle royale with her cousin, Elizabeth. Lola is accused of a heinous crime and suffers the drastic consequences. Meanwhile, back in France, Catherine finds that Charles has returned a changed man after paying a price for his mother’s relentless quest for power. 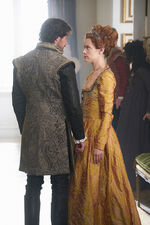