Edit
watch 04:23
'Reign' Profile: Leith Bayard
Do you like this video?
Play Sound

Leith Bayard was a kitchen servant who fell for Greer after their first meeting. After Prince Tomas began showing interest in Queen Mary, Greer lost hope and Leith was there to comfort her. After, Leith gave Greer her first kiss, she rejected him because of his status as she is of nobility and he is a servant. However, it did not stop him from pursuing her. She eventually gave in as she quickly wanted love. Their secret romance began in A Chill in the Air and lasted until Monsters when they are caught kissing in Greer's Chambers by Remy. In result, Leith was sent into the army as punishment.

Leith returned in Higher Ground and for saving Prince Francis' life, he was rewarded with becoming a noble though he could not gain a title. When he returned to the French Court, Leith hoped to get back together with Greer but she rejected him as he could not provide for her or her family as she needed someone titled and also she is engaged to Lord Castleroy whom she has grown close to. Leith, hurt by Greer's rejection, promises to rise up in power and rub it in her face. He soon found himself interested in Yvette, a young woman he met when saving her from a pushy solider. Unknown to him at the time, she was Castleroy's daughter. However, the romance was short lived due to her death. Later on, Leith was chosen to be Princess Claude's bodyguard which eventually lead to a romantic relationship after another failed attempt of Leith trying to be with Greer.

Continually trying to upgrade his status so that he could be worthy of Claude, he finally received permission from Catherine to marry Claude due to saving them both from an attempted attack from The Red Knights. After Leith's proposal to Claude, he goes on a mission for Charles to take down the Red Knights once and for all. Under the impression that Charles had a message for him, is unexpectedly stabbed in the abdomen, and left, bloodied in the snow, leaving his fate unknown, although his thoughts (perhaps his last) are of Claude.

In Playing with Fire it is revealed Leith is alive, but is taken away by the guards on Narcisse's orders. He leaves French Court in Love & Death since Claude is already married to Luc and he wants her to be happy. Claude learns in Blood in the Water that Leith is getting married after he sends a letter to her.

He is portrayed by American actor, Jonathan Keltz.

Leith is a very spirited person, one reason why Greer likes him. She learns this in one of his in Kissed where they share food and stories. Although genuinely a kind and caring person, he can be very cold when angered. Due to the fact that he was raised in the peasant class, he isn't always aware of how the rich and nobility work.

Leith is tall and slim young man presumably in his late teens or early twenties. With dark golden brown hair and light green/grey eyes. He has an overall scruff for facial hair.

He is usually seen dressed in plain garments when he is in the kitchen, or unadorned clothing. However since he's been granted wealth by Francis, he's been seen dressing in rather expensive and extravagant coats. 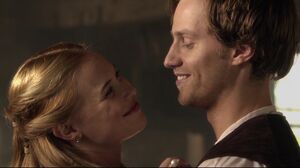 Greer: It was predicted by Nostradamus that Greer would fall in love with Leith. The two connected after Greer was heartbroken by Tomas choosing Mary. She sought comfort in Leith, and the two shared a kiss before Greer pulls away. He constantly tries to pursue her even though she tries to pull away and deny her feelings for a kitchen servant. The two begin to date in secret, they were later caught together by Greer's new fiancé, thus ruining her reputation. Leith was sent away into the army and Greer became engaged to Lord Castleroy. Leith returns to Greer with news that he's been given land and money by Francis and the two can now be together. He's however told that she will marry Castleroy because it is better for her family. Jealousy and questions brew between the two after they're final break up, but Greer ultimately chooses to stay with Castleroy. (See Greer and Leith.) 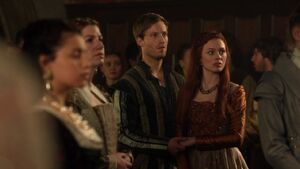 Yvette: Leith first met Yvette before he is about to go tell Greer of his new wealth. She hits on him, but is initially turned down because of his love for Greer. He later returns however after being rejected by Greer, showing interest in Yvette. The two begin courting each other, until Leith finds out that she is Castleroy's daughter and is initially put off by it. Yvette convinces him that she would like to spend these potentially last days with him, begging him to meet her at a family friends quarters. He agree's at first, but when Greer begs him not to he stands Yvette up and she dies a few hours later. 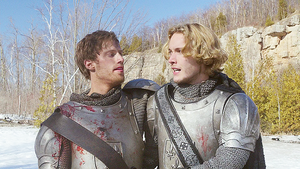 Francis: Leith first meets Francis during the Siege of Calais, when he saves Francis life. After Leith is later severely injured in battle, Francis refuses to abandon his new friends. The two share alot of things with each other. After returning to court Francis gifts Leith with lands and money, also promising a title when he is King. Although Francis had to take his lands away because of greedy nobles. He gave Leith a new position at court assisting Sebastian. He also reminds Leith to call him a friend. 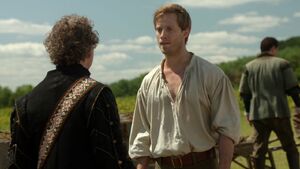 Lord Castleroy: Although at first, Castleroy was very kind to Leith to gain favor of Greer. Offering him apprenticeship and getting him into the army, saving Leith's life. Things got ugly between the two after Leith unknowingly pursued Castleroy's daughter to "get back at Greer". Which Castleroy blamed for his daughters death, claiming Leith had no feelings but only wanted her money. A confrontation between the two took place, where Leith was punched in the face by Castleroy.